Is money a friend or an enemy? Is it something we love or hate? Is money good or evil? Will money solve problems or create them? Will money lead us to truth or will it seduce us into telling lies? Does money increase our wellbeing or does it make us sick? 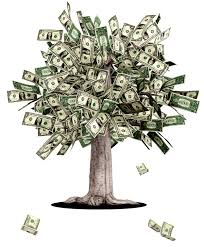 One of my personal struggles with the physical world has always been around the topic of money. I have long believed that the way we treat money provides insight into how we deal with other things such as love and relationships.

But still, I believe that money is only energy.

Why? If I resort to the fact that money is more important than anything else and if I give in to fears that a certain amount of money is required to live a good life, I lose my faith in my own abilities and skills. My capacity to create and make something from nothing is diminished the very moment I give in to the notion that money is everything.

As long as I have my health, my ability to think, skills to create and most importantly, love in my heart, in the sense that I use my skills to be of service, not service to myself (and ego) I will always have something to give and that giving alone in this material world will be returned in the form of energy known as money.

You may be wondering; what about all the people in our world who do not have health, ability or freedom to think and create? Then those of us who do, should share a little with those who do not and cannot create something in exchange for money. In doing so we are bringing light to those who are in the dark.

It is never wrong to make a lot of money if your values and treatment of money are well intended. Money has the ability to be of great service.

On the other hand, money taken, which does not belong to us or where we have not given a fair share of energy in exchange, shall be money received in great discrepancy and no true happiness will ever be attained from it.

When we go back to our child self, we would use our adult money to;

get what we need

have fun with it

We would know that money is just a physical symbol in a material world that comes in the form of energy and should be kept in constant flow.

Anything other than that is a learned behaviour about money. 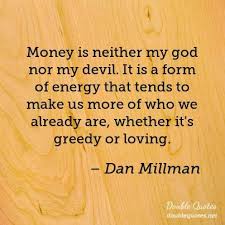 We cannot win the battle of greed, for the greedy will always be, but we can boycott the circus that has convinced us to want the things that cost way more than they are worth. 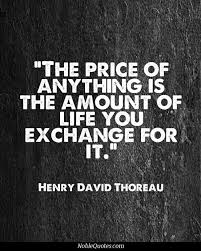 This post was inspired by the most interesting conversations and questions asked by my son when he was about 4 years old. I openly admit that it was at that point when I truly realised that perhaps, other than biological reasons, I may not really be the adult in this relationship, at least when it comes to money!!

When I was born, I got things when I cried and made some noise. As I got a bit older I started to realise that crying was not enough. I had to be more creative, I screamed, grabbed things and held them close, sometimes hid them (adults called it stealing). There was always a level of energy and creativity required to get things.

Later I learned that energy or creativity was not needed, I just had to have some round metal things and other paper things with pictures of people who looked really sad. I believe you call it money. 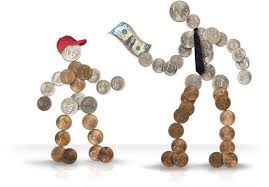 So I discovered that the more coins and notes I had, the more things I could get. It was easy to know exactly what I wanted to get because the world kept showing me all the things I should get. It was a very simple process to understand.

The most money = the most things

I learned that things needing more money were extremely precious and protected. I also learned that money doesn’t grow on trees. You have to work hard for your money. You need to save your money and I even learned that money is evil. I’m still confused about all the mixed messages I received about money. Is it good, or is bad? Can it be both?

By the time I grew up and realised that money does not grow on trees, I was so addicted to getting things that I had to resort to anything  just to get the things I was addicted to. It’s what adults call work and it is often linked to misery. I also noticed that most adults wished they could win a lot of money so that they never had to go to work again. I know this because I once saw a lot of adults playing games on a television in a restaurant and when I asked my mum if  could also play, she told me it was a game for adults. I know now, the game is called gambling and lots of adults do it because they have forgotten the skills they have to create something in exchange for the money that is needed to live in the physical world.

When money stopped being a form of energy, a sort of game of giving and receiving, it turned into something to be chased. Chasing money made the adults very busy, tired and even grumpy.

One day when I was watching television I saw an advertisement where a lady carried a lot of bags with things that she had bought from the shops. She was very happy and she showed a plastic card and I found out the card was called a credit card. I asked my mum if I could have a credit card so I didn’t have to carry all my money around. It would be easier to just keep a credit card in my pocket. I also asked my mum what a credit card is and how does it let people buy things. My mum told me that using a credit card was like borrowing money, the money doesn’t belong to you, it belongs to someone else, you just use the money that you borrowed. I thought about this, a lot. When I borrow something, I have to give it back. How do I give something back if I have used it all up? That didn’t really make sense to me. It would be like borrowing somebody’s sandwich, eating it and then how could I give it back? So I asked my mum, how do I give it back after I used it? My mum told me that you have to get some more money to give back the money that you borrowed, and you have to give it back by a certain date, otherwise you have to pay more money than you borrowed. I didn’t feel comfortable giving back more money than I used because I worked out it would mean that I always had less. I told my mum that I didn’t want a credit card and that cash would be just fine.

My mum (using her old world ideas abut saving) insisted that I take all my money to a place called a bank. She told me that my money would be safe in the bank. I was very curious about what the bank would even do with my money. Surely the bank could not buy things with my money because the bank did not use any energy to get that money. My mum also told me that the bank would take some of my money just for keeping it. Well, after that bit of information, it was clear that I would have a lot of work to do teaching my mum and other adults about money. I didn’t even bother to ask if some of my money was being used to pay for the fancy things I noticed all around the bank. I was too scared that the answer may be yes, or worse still, “I’m not sure”. That’s the other thing I noticed about adults, they work so hard for their money and then they just give it to people in fancy suits, sitting in fancy buildings and not even ask what will happen with the money. No wonder there are so many rich people in the world and others begging for food. It seemed to me, the world had some very strange ideas about money.

The other thing that I was very curious about was who actually pays for things? I discovered that parents pay for a lot of things, even plants for the garden. But who pays for plants on the street? This is when I learned all about a thing called tax. As an adult, you would already know about it. I think that tax is a very clever idea. To have shared money that pays for all the things that a community needs such as schools, hospitals, roads, parks and other useful things. I would be happy to share some of my money to pay for things that my community needs. Which led my to my next questions;  Who decides what a community needs? Who keeps all the money? Who does all the community shopping and how much money does the community actually have?

So, can the adults of the world who control the money please show the children how to do good things with money or better still, just ask us! We do happen to have some great ideas about sharing money, but unfortunately we don’t get to properly use money until we are adults and by then, well you can see the pattern, we are already adults. When we are adults we know what we know and we learned what we learned . . . about money . . . from you . . . Dear Adult.

PS: I don’t blame you for putting money above others things because I know that you came from a time and place where money was needed to ‘make it’ in the world. For example; money to study at a really good school and get a high paid job. Those times are changing. The old ideas about money come from the old ideas of power and competition. You need to know that skills, ideas, creativity, community, being of service, problem-solving and doing good are the new ways and future of making money. So please teach me the habits and skills I will need to create a future world where everyone has enough, more is not better and the person who has the most is not the winner. 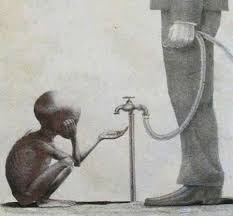